Sometimes you come across something which makes you question what you thought you wanted – this is one of those times. Why opt for a run of the mill terraced house when you can have an interesting, oversized apartment in a period building (plus huge private garden!) within the headlining street of the Holly Grove conservation area? Minutes (five) from Peckham Rye Station and Bellenden Road (two), opposite Holly Grove Shrubbery, you’ll find this one-off wonder-pad of 1377 square feet, with three bedrooms and two bathrooms, plus direct access to a generous, richly landscaped south-east facing garden of over 70 feet. Permit-parking is available on-street. Share of Freehold.

Holly Grove is one of the most exclusive streets in the Peckham Rye area, boasting fine Georgian, Victorian and Edwardian architecture. Many of the residential buildings thereon are Grade II listed, and the sunny gardens are particularly coveted – some of the neighbours even open theirs up for public viewing in the summer. Most of the houses on the street face Holly Grove Shrubbery (once known as South Grove), which was opened in 1897.

Up a few steps to raised ground level and you open into a bright, wide, and white-painted communal hall. There is just one apartment above you. It’s here that you get your first glimpse of the big private garden, through glazed doors at the rear of the building. The front door is to your right and you land in a spacious hall area, where immediately to your left is a neat guest w.c. Swing a right and you’re in a classy and formal reception room of over 15 feet by nearly 12, with two large sash windows, a beautiful marble fire surround, herringbone solid oak floors, and built-in shelving to one wall. To the left of the hall, you open into the roomy kitchen/reception room of over 16 feet by over 15. This room has such brilliant views onto the garden that it’ll be hard to spend time in other parts of the property. The timeless kitchen units are bespoke and display exemplary joinery. Corian counters get a big tick too. A back door to the left hand wall opens to a few steps down to the garden (you can also access the garden from two of the bedrooms downstairs).

The footprint of the lower ground floor is larger than the living area; as you also have the area under the communal hall. The layout is pretty genius in our view – delivering three large bedrooms, a bathroom and utility room, and an en suite to one of the rear bedrooms. To the front of the building is a large bedroom of 15 feet by over 10. It’s softly carpeted, and currently enjoyed as a home office. Off the hall area you open into a neat bathroom with contemporary fittings and white sanitaryware, and both bath and independent shower. It’s through this room that you access the utility room. To the rear of the building you’ve two bedrooms; both with access onto the paved area of the garden. Both rooms have access to large closets, and one has a vivid en-suite bathroom with traditionally-styled white sanitaryware.

Central Camberwell is a short walk or bus ride for The South London Gallery, The Peckham Pelican, The Camberwell Arms, Silk Road, Nandine and Friday jazz at The Crypt.

Green space? Warwick Gardens is mere strides away, and Lettsom Gardens is local too. Bigger open spaces include Peckham Rye Park and Common, Ruskin and Dulwich Parks. Little ones? The Villa Nursery and Pre-Prep. School is local, on Lyndhurst Way (2-7 years). The Belham (run by Dulwich Hamlet Educational Trust) is proving a massive hit with local families, and Bellenden Primary is also well-regarded. 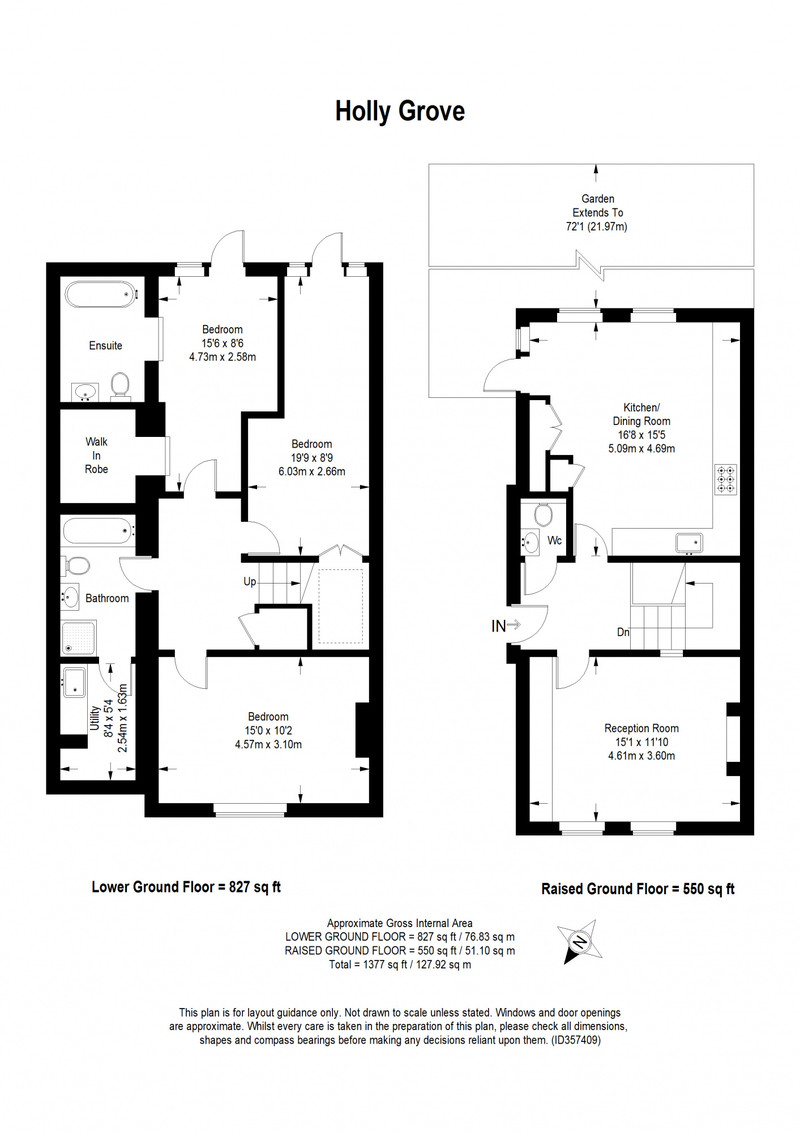