Three double bed terraced home with two receptions, three floors, two entrances, and a delightful garden extending over 110 feet - one of the largest in the area - in a charming spot that’s just a brief stroll from New Cross Gate Station - walk five minutes. You’ll be acquiring a genuine slice of South London history when you complete this purchase - this is one of the oldest houses in Hatcham Park.

Built circa 1862 and originally named South Terrace, 19 Hatcham Park Road is one of the first fourteen houses in Hatcham Park. This first terrace was built with the classical proportions of the late Georgian era and unlike the later two-storey Hatcham terraces, benefits from three full floors: lower ground, raised ground and first floor.

‘Hatcham’ derives most likely from Anglo Saxon, meaning ‘a clearing in the woods’. A brief history of this little-known residential pocket: From 1614, the land was owned by the Worshipful Company of Haberdashers. When the manor house ('Hatcham Park’) was demolished circa 1840, terraced homes were permitted to be built to strict specifications. Reputedly saved from demolition - allelujah! - in the seventies, Hatcham CA was designated by Lewisham Council in 1990.

The property has been sensitively and painstakingly refurbished by the current owners - a true labour of love - including detail right down to the flush screwless white enamel light switches! Welcome practical jobs-done include a full electrical rewire and re-plumbing in 2020, and a new Vaillant gas combi boiler (complete with weather compensation system - automatically adjusting the temperature of the radiators according to the temperature outside the house - saving gas as well as the planet). The property was also re-roofed and insulated in 2015; with two full sized white metal loft hatches to access both sides of the London roof. All chimney pots have caps or cowls fitted to prevent rain water coming back down the chimneys, and the two bedrooms on the top floor are fitted with Chimney Sheep to prevent draughts.

The house has period charm at every turn; for example, all woodwork in the house has been painstakingly stripped of decades of gloss to reveal the original pine details - including two stunning large window boxes on the raised ground floor.

The luxury bits include two beautiful (Defra approved) wood-burning stoves, for a lovely cosy atmosphere in both reception rooms (the current owner is the co-founder and ex MD of Stoake: an upmarket London stove company), piped underfloor heating to the lower ground floor - to keep your toes nice and snug in the mornings and evenings, and bespoke inbuilt cupboards on the lower ground and first floor (there’s also a super secret hatch measuring one cubic metre hidden under the lower landing, accessible via a recessed brass pull).

The bold colourways in the house are Le Corbusier's colour scheme Architectural Polychromy - a set of beautiful mineral based paints the current owners imported from Germany.

You can enter the house at lower and upper ground floor levels. The lower door has a good storage void under the stairs. You open directly into the large main reception room - a natural dining/family room - which is open-plan to the kitchen. The solid-wood-floored space is over 21 feet by over 14. The fitted kitchen is a slick white one with an architectural feel. It’s teamed with solid wood worktops.

Open your back door out to the large and lovely garden with lawned and paved areas, plus established beds and raised planters too - great for edible planting.

From the front door on the raised ground floor, off the hall you have a reception room and double bedroom. Divide or connect these as you please. Original floor boards and window boxes bring out the smiles. Between the lower and upper ground floors you have a neat and windowed WC. This has an integrated toilet/sink combo - ideal for saving both space and water.

Up to the first floor and you’ll find two double bedrooms to front and rear - at over 11 feet by over 9, and over 10 feet by over 9. Both have sash windows, pale carpets and opened-up fireplaces. Internal room layout has been designed with equality in mind. The top floor has two equal sized rooms which are ideal for children; as they are at the top they're farthest from the living space to help them sleep.

The property’s bathroom completes the tour; with contemporary white sanitary ware, and an independent shower.

Walk just five minutes to New Cross Gate Station for regular and Overground services - just one stop to London Bridge, and Fare Zone 2. Queen’s Road Peckham Station is a 12 minute walk. There are also plenty of day and night bus routes within a short walk of the house - to Elephant & Castle and beyond, or to Peckham, Deptford, Greenwich, Brockley and Lewisham.

Local eateries and drinkeries of note include The Rosemary, The Rose Inn and The White Hart. Nip down to neighbouring postcode SE15 for others, including Kudu, Smoky Kudu, Peckham Bazaar, Ganapati (who also deliver to New Cross - woohoo!), Artusi, Peckham Levels, Levan, Forza Wine and Miss Tapas.

Deptford has quite the gastronomic offering now too (a short walk east), with examples The Tapas Room, Marcella, Winemakers and a warm, European vibe, with a choice of hip hangouts, in Deptford Market Yard.

New Cross is home to Goldsmiths University with Curzon cinema and contemporary gallery. Both are very much open to the public. Local parks include Eckington Gardens, Telegraph Hill (Upper and Lower, with Farmers’ Market on Saturdays) and Fordham Parks. You’re also a short walk from Folkestone Gardens with park-side cafe Festa sul Prato.

Grab your fresh loaves from Blackbird Bakery by QRP station, or at Ayres on nearby Nunhead Lane. While you’re in Nunhead, Bambuni deli and Soper’s wet fish shop are established can’t-live-without staples. Newer additions El Vermut and Babette are highly recommended too.

Kids or thinking of? Your most local primary schools are Haberdashers' Aske's Hatcham Temple Grove, Kender, and Edmund Waller (from age 3).

Extra bits... The house has been granted two sets of planning permission: one to extend the lower WC and the other for a full rear extension of approx 25sqm. You also have the option to open up two additional vaults in the front lightwell (you can see what this looks like in the neighbouring buildings). 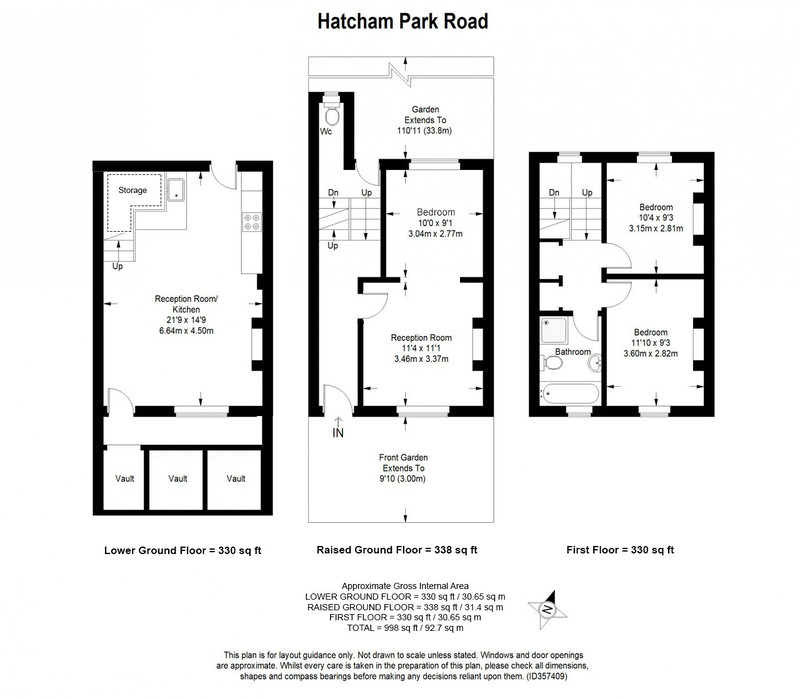