Find the house on a popular tree-lined residential street that sits at the top of Choumert Road - putting you within a 10 minute walk of both Peckham Rye and East Dulwich stations (both Fare Zone 2 - and the former is on the London Overground network).

In current configuration, you have two bedrooms and a bathroom on both the first and lower ground floors (totalling four double bedrooms), and a large through-reception and kitchen on the raised ground floor. The property is Freehold, and permit-parking for residents has recently been introduced on this and nearby streets.

Up a few stairs to the main front door and it’s a right turn into the opened-up reception rooms of over 15 feet by over 11 feet, and over 11 feet by over 9. The slightly elevated ground floor makes you feel nicely separated from pavement level: passers-by can’t see in. White walls, sash windows and stripped original boards set the scene, and a wood-burning stove and big square bay are delightful features in the front reception.

Moving through the hall, take a couple of stairs and you’ll find the neat kitchen, of 10 feet by 8, with brick-style ceramic tiling, solid wood counters, and timeless wall and base units, plus a south-facing window.

Down the stairs from next to the kitchen and you land in the surprisingly-bright and large lower ground floor (similar spaces form independent flats in some other homes on the street). You have a second front door at this level, plus a handy store under the front steps for wine and the like. Through another door and two bedrooms rest to your right. These are near-identical in dimension to the reception rooms upstairs, and the front bedroom also has a matching large square bay - this time with bespoke shutters. Both rooms are currently enjoyed as calm studio spaces.

The lower ground floor is completed by a handy cupboard, back door out to the garden, and a generous shower room set to the rear wall of the house. The garden’s a well-established city-style one, that’s a real retreat from the world. It stretches over 22 feet.

The first floor awaits and here you’ll find a large bedroom to the front of the house (taking the width). It’s over 15 feet by over 12, with three sash windows to leafy and street views. Set adjacent is the fourth double bedroom of the house (over 11 feet by over 9). The half-landing’s home to the main bathroom with modern white suite including bath, and a south-facing window.

Set between two Fare Zone 2 stations, you are also well-served by buses into Central London.

You are also mere minutes from some of the most lauded restaurants south of the river. We particularly like Artusi, The Begging Bowl and Ganapati. Other local streets Blenheim Grove, Choumert Road (the lower section) and Rye Lane provide plenty of additional options (and don’t miss The Bussey Building & Copeland Park complex and Peckham Levels, all just off Rye Lane). Firm established cafe-favourites are Anderson’s, Petitou and Small White Elephant. For more options, Camberwell, Herne Hill, Brixton and Dulwich Village are all easily reached.

Local green spaces? These include Warwick Gardens, Lettsom Gardens, Goose Green, Peckham Rye Park and Common (grade II listed and with Green Flag status) and Ruskin Park. The Peckham Coal Line - an exciting crowdfunded linear park - will hopefully soon be added to that list. You can also walk most of the way to Dulwich Village and its park through green spaces (off road), through DKH woods and Green Dale - also making the schools in that area very accessible.

The most local schools to the house include The Belham, Dog Kennel Hill, Lyndhurst, St John’s & St Clement’s, and Goose Green primaries, and The Villa Nursery and Pre-Prep. School. 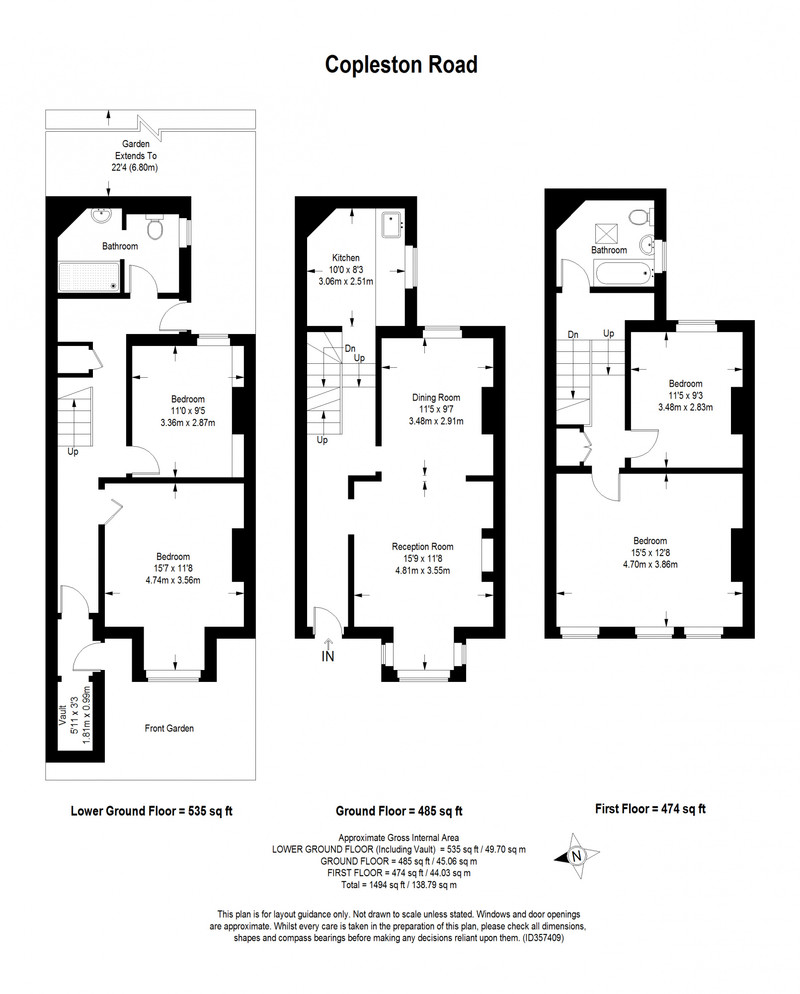