Smart and chain free Victorian bay-fronted mid-terrace house of 1056 feet (excluding the cellar and loft spaces), with a sunny east-facing rear garden of over 25 feet. Parking on the street is unrestricted.

The street’s a quiet residential one within Hatcham Conservation Area - it’s only eight minutes by foot to New Cross Gate Station (Fare Zone 2, one stop to London Bridge and on the Overground line). And you’re just a short walk from Haberdashers' Aske's Temple Grove Primary School. You're also within easy walking distance of HA Secondary School.

The house is fronted by a neat walled front garden. Up the tiled path to your front door and from the hall, you’ve got a generous double-reception stretching over 24 feet, to your right. A wood-burning stove and bespoke window shutters are noteworthy features.

At the foot of the hallway, access the basement on your left. Then there’s a neat windowed downstairs w.c. and a utility cupboard in a lobby space, before the big double-aspect kitchen, which stretches over 18 feet and has a tiled floor. The fitted kitchen units are a timeless Shaker-style, with the smartest of granite counters, and a big ceramic Butler sink. Double-glazed French doors open at the foot of the bright room to the garden - which is laid to lawn, with established borders.

From the half-landing you have a double-aspect double bedroom (of over 13 feet by over 8 feet), with more custom-made window shutters, and a modern windowed bathroom next door - this has contemporary white sanitary ware and an over bath shower (with oversized shower head plus separate spray attachment).

From the landing you have your second double bedroom. This one’s over 9 feet by nearly 11, with hand-built alcove closets and shutters again.

The twin-sashed master bedroom takes the width of the terrace - it’s over 15 feet by over 11 feet. All the bedrooms have classy oak floors. Access your large loft (via hatch) from the landing space.

The area? Hatcham CA is a quiet residential pocket of south London that’s little-known to most. From 1614, the land was owned by the Worshipful Company of Haberdashers. When the manor house (named 'Hatcham Park’) was demolished circa 1840, terraced homes were permitted to be built. Rescued from proposed demolition in the seventies(!), Hatcham Conservation Area was designated by Lewisham Council in 1990. ‘Hatcham’ derives most likely from Anglo Saxon; meaning ‘a clearing in the woods’, and reputedly, Charles Dickens wrote ‘Our Mutual Friend’ in one of the local pubs: The Five Bells (1864-5).

Saunter - passing other handsome Victorian housing stock - just eight minutes to New Cross Gate Station. There are also plenty of day and night bus routes within a short walk of the house - to Elephant & Castle and beyond, or to Peckham, Deptford, Greenwich, Brockley and Lewisham.

Local eateries and drinkeries of note include The Rosemary (Hungarian, organic, delicious) and The Rose Inn. Nip down to neighbouring SE15 for more - including Kudu, Peckham Bazaar, Ganapati (who also deliver to New Cross - you need to know this!), Artusi, Levan, Peckham Levels, Miss Tapas and Mr Bao.

Local parks include Telegraph Hill (Upper and Lower, with Saturday Farmers’ Market, or pop in a bus down to Brockley Market) and Fordham Parks.

Grab your fresh loaves from Blackbird Bakery by QRP station, or at Ayres on nearby Nunhead Lane. While you’re in Nunhead, check out such delights as Soper’s wet fish shop, El Vermut and Mother Superior (fancy bottle shops) and Goodcup (coffee shop). 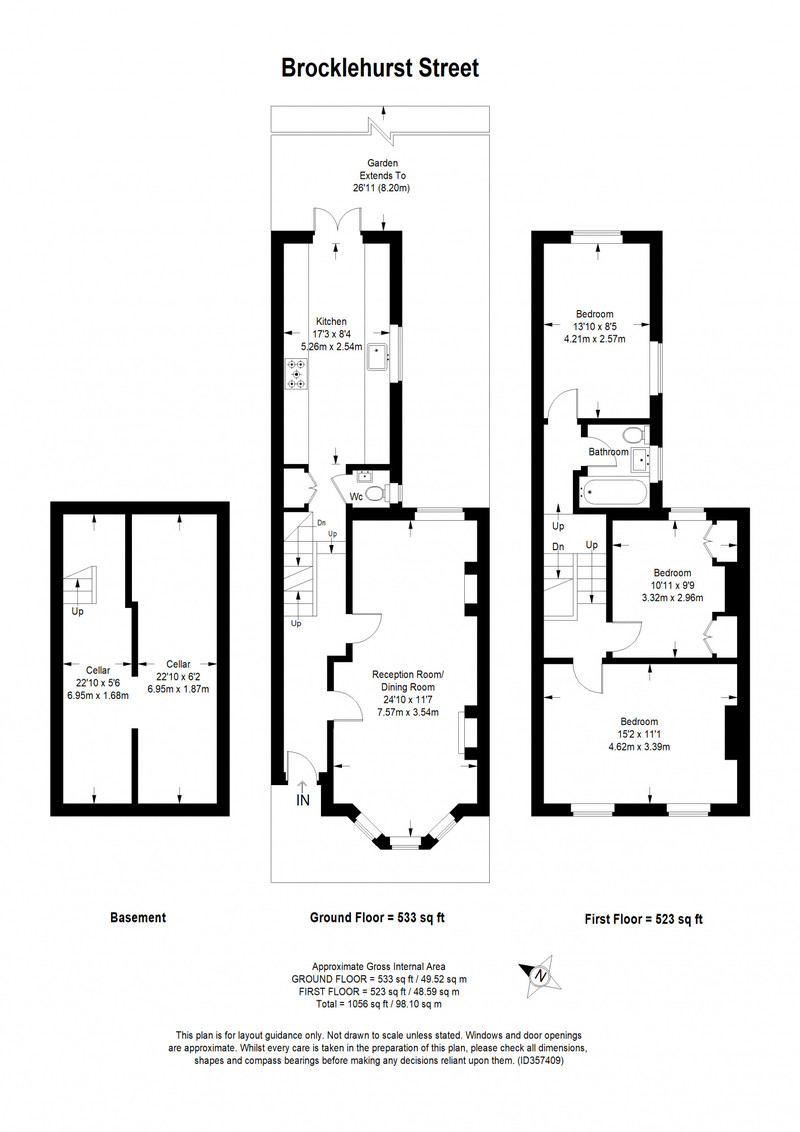